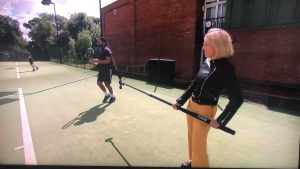 Oakleigh Park opened its tennis courts yesterday to Members for the first time since lockdown. Channel 4 News filmed at the Club for a news item which appeared at 7pm showing the opening up of Tennis Clubs, Golf Clubs and Garden Centres. We had a great turnout, 8 out of the 10 courts were being played on.